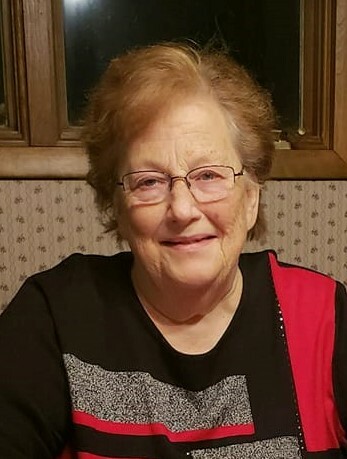 Georgia Helen (Dietrich) Roe, age 85, of rural Whitewater, WI died on July 10 at Our House Senior Living Center in Whitewater.  Georgia was born on February 14, 1937, in Janesville Township, Rock County, WI to George A. and Helen M. (Kersten) Dietrich.  Georgia graduated from Janesville High School, Janesville, WI in 1955 and the University of Wisconsin-Whitewater in 1959, with a degree in Business and Finance.  She married Roger J. Roe on August 1, 1959 at the Little Brown Church in Nashua, IA.

In 1959, Georgia and Roger moved to California, where Georgia taught business classes to high school students (including children of Hollywood stars) until 1961.  Upon returning to Wisconsin, they settled in Lima Township, Rock County.  From, 1963-1997, Georgia worked in Janesville, WI as the Purchasing Director and Business Manager of a chemical plant (known variously as Varney Chemical, Ashland Chemical, Sherex, and Witco Chemical Co.) She retired from Witco in 1997.

In retirement, Georgia was active in the Wisconsin Hosta Society and designed and maintained shade gardens at her home that featured 400 different varieties of hostas in all colors, sizes, and shapes, and opened them to tours on request. She also updated her family's genealogy, successfully tracing back eight generations, continued to be an avid buyer, seller, and collector of antiques, and served as the managing director of her husband's auction business until his death.

Throughout her life, Georgia was active in her community. She “grew up” in 4-H and was the Rock County Honey Queen in 1957.  She also served as a 4-H leader for over 40 years, was a long-time volunteer at the Rotary Gardens in Janesville, and taught Sunday School.  Georgia loved to play cards, especially Euchre and Bridge, and traveled extensively across the United States and Europe. She was a member of the Congregational Church U.C.C. in Whitewater.

Georgia was preceded in death by her husband Roger (April 2003), her daughter Marjorie A. Roe (June 2017), her sister Marlene Stenberg, and her parents.  She is survived by her daughter Pam (Brian) Durham of Springfield, VA; her son Jeff (Julie) Roe of rural Whitewater; her son Marc (Debbie) Roe of rural Whitewater; and her grandson Brandon Roe and his fiancée Bridgett Hoffmann, of Beaver Dam, WI.

Georgia was a kind and gentle person and much loved by all who knew her.  She will be missed.

To send flowers to the family or plant a tree in memory of Georgia Roe, please visit Tribute Store

Share Your Memory of
Georgia
Upload Your Memory View All Memories
Be the first to upload a memory!
Share A Memory
Send Flowers