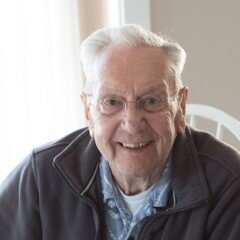 Carl Petersen, 94 years old (almost 95), passed away peacefully at home surrounded by his family on Monday, June 6, 2022.  He was born in Hyrum, Utah to Russell & Myra Louise (Phillips) Petersen at the family farm on August 12, 1927.  On his 17th birthday, Carl joined the Coast Guard (underweight for the other branches - their loss) and was called to active duty on December 26, 1944.  He reported to San Francisco and was assigned to an LST (Landing Ship, Transport) to prepare for the invasion of Japan. When World War II ended in August, 1945, just before his 18th birthday, the ship sailed to Iwo Jima, Okinawa and Japan as part of the occupying forces.  Carl was then stationed in Pearl Harbor from December 1945 thru June 1946 on a weather patrol Coast Guard frigate. After discharge from the Coast Guard, Carl returned to Utah and California.  In October, 1948 he joined the Army and completed Diesel Mechanics School.  He was stationed in Fort Lewis, WA and then based on a coin flip, his unit went to Alaska to build and maintain air strips (the other unit went to Korea).  Carl was in the Army from October 1948 – December 1951.  He returned to Utah but the need to travel took over again and in December, 1954 he joined the Air Force and was trained in Ground Power Mechanics to support air planes.  His love of travel took him all over the world, stationed in many states, and countries.  He became an instructor and was on TDY (temporary duty) at Truax Field, Madison when he meet Duann Doolittle Werner and her beautiful daughters, Debra & Lisa.  After a 5 day courtship, they married in September 1959 and moved to Kinchloe AFB in Sault St. Marie, MI where they were stationed when Sandra was born.  In 1961 while on TDY at Andrews Air Force base in Maryland, Gary was born.  This very happy family of 6 now traveled the world following their Dad to bases in New Jersey, France, England, Texas, and multiple TDY’s all over the country.  Carl retired from military service in 1969, after 20 years, and his final move was to Cambridge, WI to the house they lived in until his passing.

Carl went to school for TV repair, and with Duann owned and operated Petersen Jewelry & TV.  In October 1979 he went to school and completed his police training and was hired as the Cambridge Chief of Police, where he proudly served until June, 1989.  Carl was also a proud member of the Cambridge Fire Department for 15+ years.   After retiring from the police department Carl became the best grandpa and helped watch his new grandbabies, every day for a year.  His love for children remained strong his entire life.  He loved visits from his grandchildren and great grandchildren, often playing their favorite marble game with them.  Visits to GG (Great Grandma) & Big Papa’s house are a favorite memory for all the grandchildren and great grandchildren.  In retirement he did wood working, loved to maintain his lawn and flower beds, was able to fix any and all motors, and helped anyone that needed it.

Carl was a true member of the Greatest Generation, a Patriot, a man of honor, a wonderful Husband, Dad, Father-in-law, Gpa and Big Papa.  His life was everything that one hopes their own life will be.  He left nothing undone.  Carl’s legacy of love will live on forever for his family and all that knew him.  He will not be forgotten and he will remain in our hearts forever.

Special thank you to Agrace Hospice and our care givers for helping us keep Dad at home for the last two months.  We couldn’t have done it without help from Melissa, Halee, Katelyn, Susan and the many other amazing caregivers that supported us thru this transition.  We will be eternally grateful for their love, guidance and support.

Donation may be made in Carl’s name to the Cambridge Fire Department or Agrace Hospice.

Visitation will be on Sunday, June 12, 2022 at Nitardy Funeral Home in Cambridge, from 4PM to 7PM.  A celebration of life service will be at 7PM and can be attended virtually by following the link https://client.tribucast.com/tcid/2326583835.

A memorial service will take place at 9AM on Saturday, July 9, 2022 at Nitardy Funeral Home in Cambridge with Military Honors to follow.  Guests may attend this service virtually at https://client.tribucast.com/tcid/4756676197 .

To send flowers to the family or plant a tree in memory of Carl Petersen, please visit Tribute Store
Sunday
12
June

Visitation Prior to Celebration of life

After Memorial Service outside of the funeral home.

Share Your Memory of
Carl
Upload Your Memory View All Memories
Be the first to upload a memory!
Share A Memory
Send Flowers