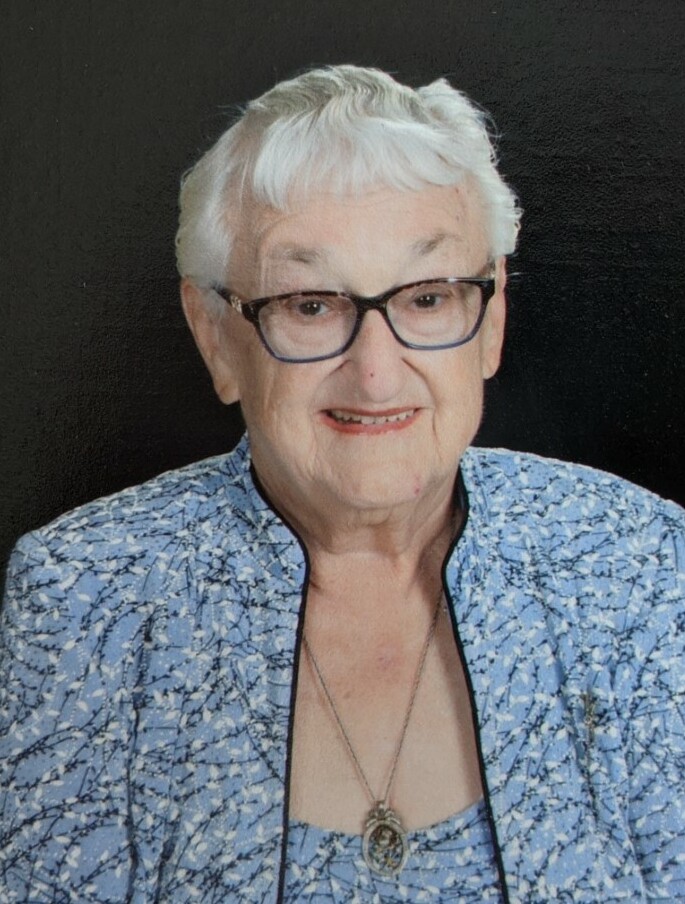 Joanne Elaine (Carlson) Gyland passed quietly in her sleep on January 4, 2022 under the gentle and kind care of Stoughton Hospital doctors and nurses. She was born on October 19, 1932 to Laura (Bublitz) and Leonard Carlson of Albion, Wisconsin. She excelled as a musician and student throughout her elementary and high school years. After high school she graduated from the Madison General School of Nursing where she formed life-long friendships and attended reunions well into her 80’s. She often talked about the internship she did at Cook County Hospital in Chicago, caring for people with polio.

Joanne married Ole Gyland Jr of Cambridge on August 20, 1955 and moved to the Gyland family farm where she would live for the majority of the rest of her life. Her heart and hands were always open to helping others and numerous people who needed a place to stay were taken in under her and Ole’s roof. Throughout her years, she put her nursing skills to use by caring for family members in their homes and later being a volunteer at the Skaalen Home in Stoughton.

Her contributions to her community included 4-H leader, church choir director, frequent accompanist for church and other events, and active membership in her church circle, UW-Extension Homemakers, Mother’s Club, and the Cambridge-Deerfield Community Choir. While her children were in high school, she was a constant chauffeur for the many clubs, sports, and music organizations they were involved in. Her attendance at events continued as her children entered college and even to her grandchildren’s college events.

In her fifties, she began working at WPS where once again, she gained a circle of lifelong friends. During her retirement years she reconnected with her high school classmates, nursing school classmates and extended family members. Joanne loved to travel and once retired, she managed to get to every state in the country except Hawaii. She particularly loved the Rocky Mountains. Travels also included trips to Europe and areas of the Caribbean. When not traveling, volunteering, or being with friends and family, she enjoyed sewing, knitting, playing piano, and gardening. As time passed, she increasingly enjoyed watching the many birds that frequented her bird feeders and had a special connection with a particular cardinal.

A special note of gratitude to Duane Woolover for the friendship and loving kindness shown to Joanne throughout her time in assisted living and memory care. His ongoing visits kept her spirit alive. The family is also grateful for the end-of-life cares and support given by Magnolia Garden of Skaalen Retirement Services, Stoughton Hospital Medical Unit, and Agrace Hospice staff.

In lieu of flowers, the family asks that donations be made to the East Koshkonong Lutheran Church Music Fund or Stoughton Hospital Foundation.

The Nitardy Funeral Home, Cambridge, WI is assisting the family, online condolences may be given to the family at www.nitardyfunerahome.com

The Funeral Services will be available for viewing line using this link: https://client.tribucast.com/tcid/2533937910

Share Your Memory of
Joanne
Upload Your Memory View All Memories
Be the first to upload a memory!
Share A Memory