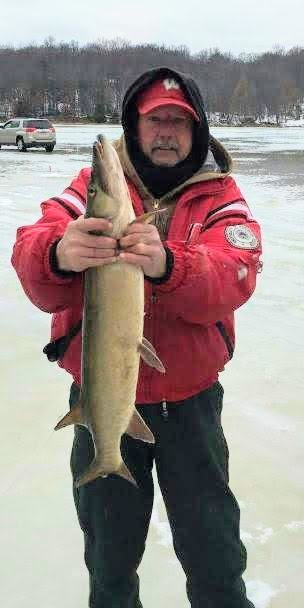 Michael Henry Sillman, 66, of Deerfield passed away in his home surrounded by family on Wednesday, August 12, 2020 after a long and courageous battle with cancer.

Michael was born on July 8th 1954 in Watertown to Milo and Marcia (Feutz) Sillman. He grew up in Waterloo and graduated from Waterloo High School. Mike was a letter carrier for the United States Postal Service for 35 years. He married Eileen Perman, on September 7th, 1985 in Waterloo.  Together they raised two sons, Andy and Adam.

He was a member of the Lions club in Marshall and the Waterloo Gun club.

Whether hunting, fishing, working in his lawn, chopping wood or taking care of his dogs, Mike loved being outside.  He was a self-taught fisherman and always looked forward to his yearly trip to Canada to fish with his fishing buddies.

Mike also enjoyed all sports.  If he wasn’t attending a live event, he was watching one on TV.

Mike was a good husband, father and friend.  He was a genuine man and was good to others.  He was curious about life and could carry on a conversation with anyone.  There will only ever be one Mike Sillman.

He was preceded in death by mother, Marcia Sillman,  grandparents Elise and Alfred Feutz, Henry and Margaret Sillman, and mother-in–law, Jackie Perman.

A celebration of life will be determined at a later date.

The family would like to extend special thanks to the Dr. Howard and staff at UW Radiation and Oncology Department,  Dr. Hegeman and staff at Carbone Cancer Center and Agrace Hospice for their exceptional care and kindness.

The Nitardy Funeral Home of Cambridge is assisting the family.

Online condolences may be given to the family at http://www.nitardyfuneralhome.com

To send flowers to the family or plant a tree in memory of Michael Sillman, please visit Tribute Store

Share Your Memory of
Michael
Upload Your Memory View All Memories
Be the first to upload a memory!
Share A Memory
Send Flowers