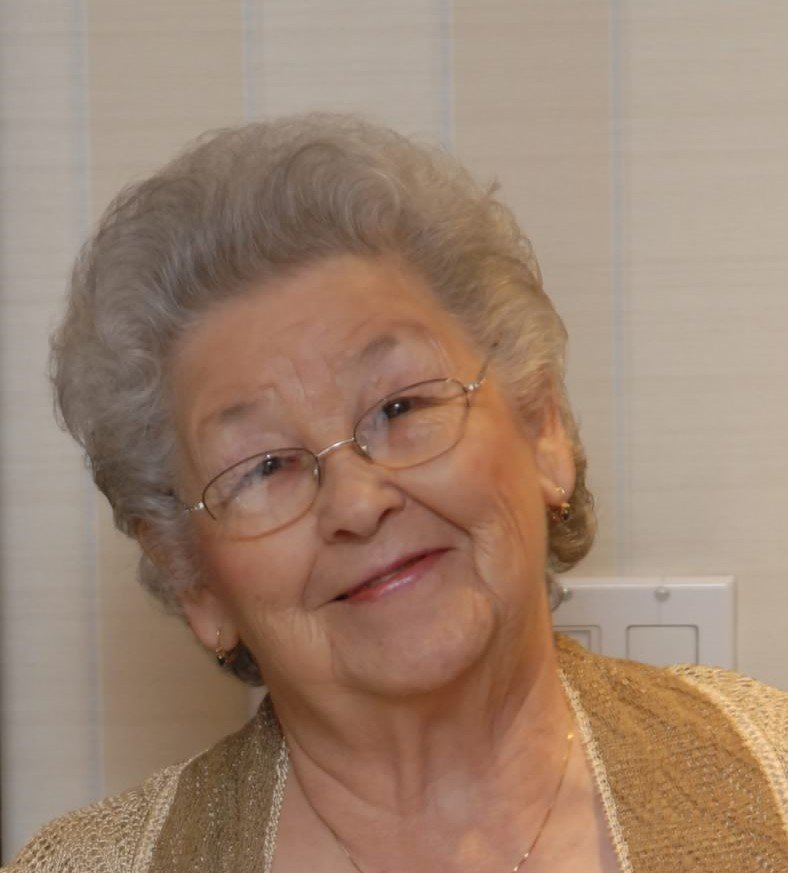 Beatrice (“Bea”) Perich (nee Beatriz Martinez), formerly of Whitewater and New Berlin, was born to eternal life at her daughter Joni’s home June 22, 2020 at the age of 97 years young.

Bea was born on February 23, 1923 in Cachipay, Colombia and came of age in Bogota where she studied accounting and became a full-charge bookkeeper. She liked numbers and professional sports for as long as she could remember.  Marrying these two interests, she invested in Colombia’s professional futbol team. At one time, she hoped to go to Paris, to live there but her mother discouraged her, or may have outright forbid her from leaving Bogota. Years later, she communicated with friends who had emigrated to the U.S. and decided to cash in her soccer team stock holdings and pursue the American Dream. The United States would soon be her home.  She arrived in America in 1950 and lived for a short time in Milwaukee at the Convent of the Sisters of the Divine Savior.  She answered a classified ad for a bookkeeper at Falk Corporation in “the valley.”  During her interview, the manager called Falk’s international sales manager in to continue the interview.  Both were very impressed with Bea’s skills, poise, professionalism, and perfect grammar. Apparently, an expansion was afoot, and Bea was told of  Falk's growing international sales in Colombia and other South American countries. Falk was in need of a bilingual sales assistant.  She was asked if, instead of the finance department, would she be interested in translating RFPs to English and sales quotes to Spanish.  She said, “Of course!” They asked her if she could start right away and she pulled a half peanut butter sandwich from her pocketbook and said, “I am ready to start today, I have my lunch here.”  And so, she did. In those days, Bea rode the Milwaukee County Route 35 bus from the convent to Falk, where she deboarded at the 16th St Viaduct, and traversed the steep steel grate stairs.  Only once did she allow her leather bound high heels to slip through the steel grates. The grating ripped the leather from a heel and her beautiful Italian pumps were ruined.  Then, snow fell one day, and she hadn’t thought to bring overshoes to protect her pumps, so she climbed the snowy stairs to board her bus home and was sad to find another of her beautiful imported shoes was ruined.  One day a gentleman friend who had settled in Chicago called to say hello and Bea confided in him that the commute was lethal for her treasured imported leather shoes, and with that conversation a plan was hatched to move to Chicago. He greeted Bea at Union Station with a ring in hand.  Mom explained she was just a friend.

In short order, Bea enrolled in an evening citizenship class at Lakeside Elementary School where she met Zivan, the love of her life.  When she walked in the classroom, she gave her characteristic wink and smile to Zivan and found an open seat near him.  He was smitten.  At times the instructor would catch them whispering to one another and call out, "Who is the instructor here, Mr. Perich?" They began dating, going out for dinner and after 3 months, Zivan asked, "Bea why not get married, we will save money on rent and eating together." They married and on day one, Zivan asked what she could cook. Bea replied,  “I can boil water and make you a cup of tea!”  At that he taught her to cook and bake. Bea had a natural talent, intuitively combining herbs and ingredients and became a fabulous cook.  Her family endlessly enjoyed delicious home cooked meals and feasts. Her knowledge of nutrition, along with her love of and natural talent in cooking, came into play beyond the Perich family—in the 1960’s Bea found herself employed at the UW Extension office in Walworth County.  There, Bea would travel to low income and migrant farm worker families to teach nutrition, cooking, and how to economize at the grocery store. Teaching others energized and gratified her.

Bea and Zivan had a beautiful life together, were endlessly devoted to one another, and were married for 56 years.  Coming from distinct cultures and religions might have been difficult for some, but their marriage seemed to be stronger despite the differences.  They married three times—first in the civil court, then when his fellow Serbs learned of this they insisted on a Serbian Orthodox ceremony. Next, Bea’s family, devoutly Catholic, protested and the pair wed again in a proper Nuptial Mass receiving the Rite of Marriage sacrament.

The next chapters of life played out in the Chicago suburbs of Glen Ellyn and Wheaton, then later in Wisconsin in Whitewater, New Berlin, and finally in Milwaukee County. They held on to their little farm even while the family moved to New Berlin to make Zivan’s daily commute more manageable.  Upon retirement, they returned for a decade to “the farm” where grandchildren were always welcome.  There the grandchildren learned to drive, enjoyed climbing trees and playing in the hay loft, driving the golf cart, shooting free throws with their Grandma, and going to Whitewater Lake to fish. The most treasured memories came from those times on the farm where together Bea and Zivan enjoyed tending to their magnificent vegetable garden, cherry, apple, pear, plum and peach trees, grapes and beautiful flowers. Bea was a critical thinker, lifelong learner, fabulous cook, skilled knitter and  embodied an infectious joie de vivre—everyone she knew loved her. Her grandchildren brought her tremendous pride and joy and she was delighted with the arrival of her great-grandchildren. She was super patriotic and voted in every election no matter how small, with one exception—due to COVID and having recently moved to the Jewish Home, Bea’s absentee ballot never arrived on time and she missed the April 7th vote in which she was bound and determined to vote for a new Wisconsin Supreme Court Judge.  She was very disappointed the ballot never came but afterward remarked with delight when she learned her lady won!

Bea’s final year on earth was filled with enjoyment—at 96 Bea loved her weekends at Joni’s little farm.  It reminded her so much of the treasured times on her own piece of paradise in the country.  She gardened pulling weeds and planting with the same energy and determination she had displayed years earlier.  No one could believe this kind of strenuous work could be performed by little Bea in her advanced age, so Joni memorialized much of her activities in photos. When asked what her secret was to her long life and beautiful complexion, Bea urged ladies to have an avocado each day—one half to eat, and the other for a facial mask.  During weekends at Joni’s she would sit for hours under a big oak tree and enjoy God’s bountiful nature where an abundance of birds kept her company.  Even at this age, she could easily walk a quarter mile. Bea loved her weekends with Joni, out in the country where she enjoyed a queen’s treatment of pedicures and hair styling. Bea enjoyed her last glorious vacation in her final year too—she and Joni travelled to Cabo to escape the wintery spring and she was the fan-favorite of the resort. A vacationing nurse made a daily poolside check on Bea, and Joni made sure she kept drinking enough water to stay happy, healthy and hydrated. Every day she was greeted with smiles, birthday treats, and even a personal singing waiter.

Bea was a grateful, generous woman of faith and praised God’s blessings in all living things. Among her virtues were an immeasurable enjoyment of life, endless generosity, compassion, and the ability to clown around for the mere purpose of giving the gift of laughter and joy to others. Laughter always emanated from any room Bea inhabited. Everyone who met her loved her.  Bea was always ready for any new adventure and expended endless energy in pursuit of enjoyment—joy in anything at all—like conversation, beholding natural beauty, eating and quiet reflection. When in isolation visiting on FaceTime, we would talk about the pandemic and how terribly lonesome people were in lockdown and she would comment, "Well nobody likes the isolation, but we have to be patient, so the virus doesn't spread." She always had compassion for others and accepted the sacrifice of isolation for the greater good of protecting others from sickness. When the horrible murder of George Floyd happened, she conversed with compassion and an understanding of the pent-up frustration in the Black community with hundreds of years of inequity and injustice.

The family will gather at Utters Corners Cemetery for a private graveside service and follow with a day at Whitewater Lake in memory of Bea. In lieu of flowers, memorials appreciated to Jewish Home and Care Center, Attn: Foundation, 1400 N. Prospect Ave., Milwaukee WI 53202 or go to https://ovation.org/foundation/make-a-donation/ (or to a charity of donor’s choice).

To send flowers to the family or plant a tree in memory of Bea Perich, please visit Tribute Store

Share Your Memory of
Bea
Upload Your Memory View All Memories
Be the first to upload a memory!
Share A Memory
Send Flowers