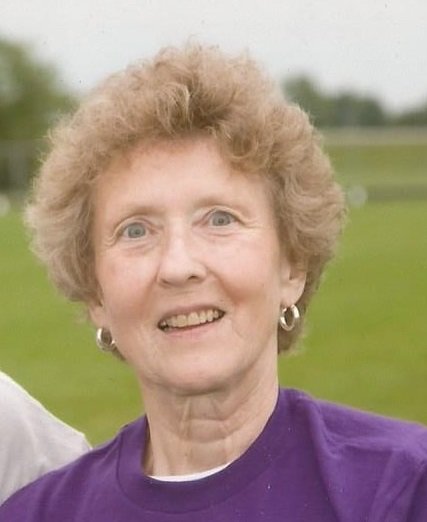 After a more than 20-year fight with cancer, Louella Jean Zahn (Badzinski) found peace with the Lord in heaven on August 26th.  She was accompanied in her final moments by her children and grandchildren at Fairhaven in Whitewater.

Lou was born October 27, 1942 in Thorp Wisconsin.  She was the 8th child from a family of nine brothers and sisters of Louis and Rosella (Duss) Badzinski.

Lou graduated from Thorp high school in 1960 and received her Bachelor of Arts degree from the Wisconsin State College in Eau Claire, Wisconsin in 1964.  She married Donald Zahn of Sullivan, WI in May 21, 1966 at St. Bernard’s Catholic Church in Thorp, WI.  Together, they completed their Masters degrees from Northern Arizona University in 1969.

Lou worked for the University of Whitewater from 1978 until her retirement in 2007 almost exclusively with the Continuing Education Department.  In addition to the regular work week, she spent many Saturdays and Sundays on campus helping out with all of the various camps and conferences.  Originally hired as a typist for the University, she started many days in the early hours around 2 am with a side job typing theses on an electric typewriter for foreign students pursuing their MBA’s.  Lou loved working for the University and with all of the wonderful staff.

Lou was a devoted member of St. Patrick’s Catholic church in Whitewater.  She enjoyed singing in the choir and cantering.  She was a founding member of the University Optimist Club and still assisted with volunteer events such as ticket taking at all home Warhawk football games into 2018.  She was an avid Warhawk sports fan, especially football, making several trips to the Stagg Bowl in Virginia.

Lou was diagnosed with breast cancer in 1996.  Despite battling this disease through double mastectomy, losing the use of her left arm, and continuous daily pain, she rarely complained and made the most out of every day.  The family would like to thank Pro Health care oncology in Oconomowoc for their dedication and support in helping Lou battle cancer over two decades.

Louella was preceded in death by her parents, brothers Bob and Eugene, and husband Don.  She is survived by her sons Shane (Amy) and Travis of Whitewater and daughter Sally (Kevin) of Whitewater; and six grandchildren, Scott, Isabelle, Emily, Allison, Celine, and Trenten; as well as one brother and five sisters.

Funeral service will be held on Friday, August 30th at St. Patrick Catholic church in Whitewater.  Visitation will be from 9 to 11 am with mass at 11.

If desired, memorials may be made to St. Patrick’s Catholic church of Whitewater, or in her name to the Cancer fighting organization of your preference.

To send flowers to the family or plant a tree in memory of Louella Zahn, please visit Tribute Store
Friday
30
August

Share Your Memory of
Louella
Upload Your Memory View All Memories
Be the first to upload a memory!
Share A Memory
Send Flowers