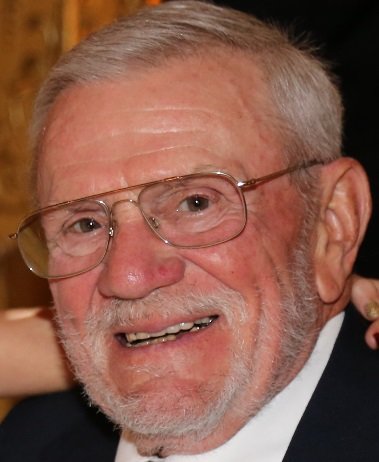 Whitewater, WI/Addison, IL – Robert “Bob” Rowley, age 87, of Whitewater, WI, a former resident of Addison, IL, passed away Tuesday, July 9, 2019. He went peacefully with his wife and son by his side. Bob graduated Crane Tech High School in Chicago, IL in 1950.  He joined the Air Force as a Basic Airman in Feb. 1952 and married his high school sweetheart, Thora “Billie” Rowley on May 17, 1952.  After his honorable discharge from the Airforce, Bob worked with Harlo Electric Supply and then General Electric.  After retiring Bob and Billie moved to Whitewater, WI in 1996.  In retirement Bob enjoyed golfing whenever the weather permitted.  He was a member at the local golf club, Prairie Woods, and golfed regularly with his son, grandson, and great grandson.  He left us less than 24 hours after playing a round with his son and grandson.  If he wasn’t golfing, he was swimming at the Whitewater Aquatic Center with Billie. His youthful spirit and abundant love made him a favorite of all his 12 grandchildren and 19 great-grandchildren.  He was preceded in death and welcomed in heaven by his two children, his eldest son Jim and daughter Lynn.

A celebration of life will be held at Prairie Woods Golf Course on Saturday, July 13, 2019 from 2-6pm.

To send flowers to the family or plant a tree in memory of Robert Rowley, please visit Tribute Store
Saturday
13
July