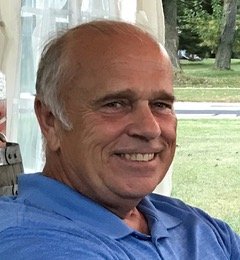 Scott graduated from Wisconsin Lutheran High School in Milwaukee, and then from UW-Milwaukee with a degree in Criminal Justice and a minor in English. He went on to receive a master’s degree in Business Administration from UW-Oshkosh.

On September 23, 1978, he married Dorothy Riek of Milwaukee, WI. They had two daughters, Erica and Rachel.

Scott began his 30 year career in law enforcement as a patrol officer in Milwaukee, moving on to the City of Muskego PD, and then taking a promotion to become police chief for the Village of Palmyra. He served in Palmyra for 22 years. Scott went on to teach child abuse and criminal investigation courses at UW-Whitewater. Scott’s passion in life was getting help for children who were abused; he gave numerous presentations on the subject for the Child Abuse Education Foundation of Wisconsin across the country.

Scott inherited his love of carpentry from his dad and shared his talent with family and friends. He was a huge movie buff, instilling his love of black and white movies and old mysteries in his daughters.

He was a member of Bethany Lutheran Church in Fort Atkinson and was also a member of the Wisconsin Police Chiefs Association.

Scott was preceded in death by his parents.

A memorial service will take place at 12pm on Tuesday July 31, 2018 at Bethany Lutheran Church, 404 Roosevelt St., Fort Atkinson, WI. A visitation will be held from 10am until the time of the service. All are invited to attend.