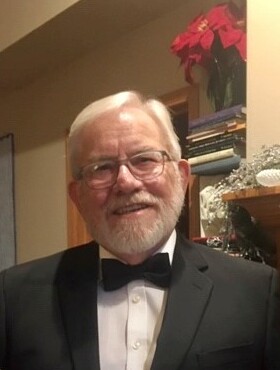 William Gerald Albrecht was born on May 4th, 1943 in Chicago, Illinois to William and Essie Albrecht and welcomed by older sister, Jean. He was known to his friends, and anyone else he met, simply as Bill. Bill unexpectedly passed early in the morning on January 5th, 2023. Bill is survived by his loving wife of 58 years, Joyce. Together they raised a daughter, Royce, and welcomed son-in-law, Luke, into their family. Luke and Royce have three children - Jacob, Marcella (Ellie), and Lydia - who all adored their grandfather.

Bill spent his childhood into his adult years in Chicago. Growing up, Bill began his lifelong passion for baseball. He would play every chance he had, even persevering through the wool uniforms. This love followed him into adulthood, where he was the pitcher on the park district and church teams for many years. As a teenager and young adult, Bill’s time off of the baseball diamond was spent exploring his talent for drawing and photography.

Bill spent his working years in the construction industry. He began as a rodman in the Technical Engineering Union and was a diligent and honest worker. Over the years, Bill’s attention to detail never faded. This is especially true as he finished his career as a Senior Superintendent at Pepper Construction.

His love of baseball followed him into retirement where he watched every major, minor, and little league game that he could. This love was joined by an enjoyment of golf. In the summers, Bill would golf at least once a week at different courses near his home in Whitewater, WI. When Bill wasn’t watching baseball, golfing, or spending time with his family, he could be found in his workshop creating. Many of those who had the pleasure to know Bill have been blessed by the handmade wood items he made for them.

Bill will be remembered for his sense of humor, desire to serve others, love for those around him, and dedication to Christ. A visitation will be held by the family on January 14th, 2023 at Briggs Road Evangelical Free Church in Elkhorn, Wisconsin from 9:00 am to 12:00 pm. In lieu of flowers, a donation can be made in Bill’s memory to the Gideons International or your favorite charity. Nitardy Funeral Home is assisting the family with arrangements.  Online condolences can be made at www.nitardyfuneralhome.com

To send flowers to the family or plant a tree in memory of Bill Albrecht, please visit Tribute Store
Saturday
14
January

Share Your Memory of
Bill
Upload Your Memory View All Memories
Be the first to upload a memory!
Share A Memory
Send Flowers