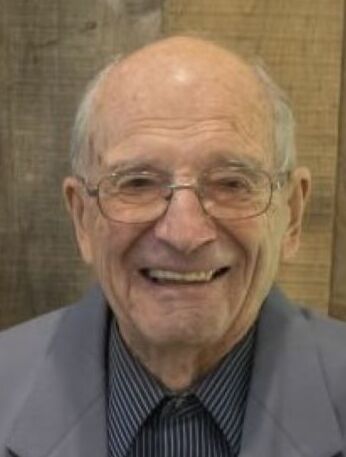 Lawrence was born on August 16, 1927 to Lawrence and Edna (Strohbusch) Gunnelson.  He graduated from Cambridge High School in 1945 and was proud to have been the oldest attendee of the alumni banquet the last 2 years.   Larry farmed most of his life with corn and soybeans, dairy cows in the earlier days and hogs in the 1970s into the early 1990s.  In 1960, his father purchased a John Deere dealership in Stoughton WI.  He worked with his brother, Roger, at Gunnelson Implement until 1975.

In 1957 he met and married Elizabeth Hanson.  They had 3 children, Lynn, Lori and Brian.  This year they celebrated their 65th wedding anniversary.

He had many adventures, traveling to all but 1 state and most of Europe, Russia, China and Israel.

Larry also held many positions, M&I Bank Board of Directors, Cambridge School Board Member and FFA Alumni.    He was also a founding member of Koshkonong Prairie Historical Society.   He arranged for the donation of an 1800s Deering Corn Planter and 2 Evinrude Motors.  Larry was a Church Council Member, Sunday School Teacher and Investment Fund Member for East Koshkonong Lutheran Church.  His Great Grandfather, Ole Gunnulson, had designed and helped build the First East Koshkonong Church.

Larry designed and built a grill for grilling pork chops and did it for many years for the Jefferson County Pork Producers.  The final year he grilled over 2000 pounds of pork chops for the annual fund raiser.  He also engineered and built a large rotating pancake griddle to be used for the FFA Pancake breakfast.

Also, he bowled with his brother, Roger, on Gunnelson Implement bowling team in Stoughton.    Larry was a die-hard Packer fan for which he was a Stockholder.  He also had season tickets to the Milwaukee games for many years.  Larry’s brother, Jerry, took both him and their brother Roger on two memorable trips, one to Norway to the original homestead and the other to New England to watch Matt Kenseth race.

The family would like to thank Allie and the Staff at Reena Memory Care in Fort Atkinson and Karissa and the Staff of Agrace Hospice for their compassionate care and kindness over the last several months.

Visitation will be held on Tuesday, November 29, 2022 at Nitardy Funeral Home, 208 N. Park Street, Cambridge, WI 53523 from 4 pm – 6 pm.  There will also be a visitation at East Koshkonong Lutheran Church on Wednesday November 30, 2022 from 10 am – 11 am, immediately followed by funeral service and burial at 11 am.  A luncheon will be served in the East Koshkonong Church basement.

In lieu of flowers, memorials may be made in his name to Agrace Hospice or to East Koshkonong Lutheran Church.

To send flowers to the family or plant a tree in memory of Larry Gunnelson, please visit Tribute Store
Tuesday
29
November

Share Your Memory of
Larry
Upload Your Memory View All Memories
Be the first to upload a memory!
Share A Memory
Send Flowers