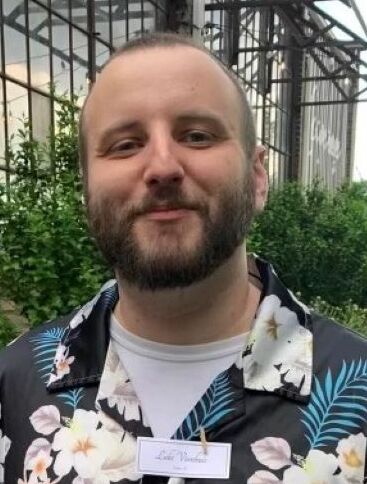 Luke Joseph Veenhuis, 30, formerly of Fort Atkinson passed away unexpectedly from natural causes at his home on Monday, September 26, 2022.

He was born on June 12, 1992 in Fort Atkinson to Randy and Sue Veenhuis. Luke attended grade school at St. Joseph Catholic School in Fort Atkinson and later graduated from Fort Atkinson High School in 2010. During high school, Luke was definitely known for his sense of humor and many antics. His favorite activities during that period in his life included participating in marching band, swim team, and Boy Scouts, all of which helped to shape the man he became. In 2010 he earned Boy Scout’s highest award, Eagle Scout. He later attended UW-Whitewater and graduated with a Bachelor’s and later a Master’s degree in Computer Science. Luke was currently employed by Dartmouth College of Hanover, New Hampshire, as a computer research engineer, specializing in artificial intelligence.

He enjoyed spending time with friends and family. His true passion was for the work he did through Dartmouth College and the research projects he was involved with. One of his current projects involved using artificial intelligence computer technology to further cancer research. He was particularly proud of this project and excited to use his skills to potentially make an impact in peoples lives.

Luke is survived by his parents, Randy and Sue Veenhuis; sisters, Madalyn Veenhuis and Emily Veenhuis; grandmothers, Penny Veenhuis Padinger and Barb Kostichka; many aunts, uncles, cousins, other relatives and many friends. The family would also especially like to thank Luke’s roommate Rob for his friendship and help to us during this very difficult time.

He was preceded in death by his grandfathers, Don Veenhuis and Randy Kostichka.

A public visitation will take place from 3PM to 6PM at Nitardy Funeral Home in Fort Atkinson on Monday, October 3, 2022. A private funeral service will follow visitation at the funeral home. Following cremation, a burial will take place at a later date.

Any memorials received will be put towards a scholarship in Luke’s name to be announced in the future.

To send flowers to the family or plant a tree in memory of Luke Veenhuis, please visit Tribute Store
Monday
3
October

Share Your Memory of
Luke
Upload Your Memory View All Memories
Be the first to upload a memory!
Share A Memory
Send Flowers