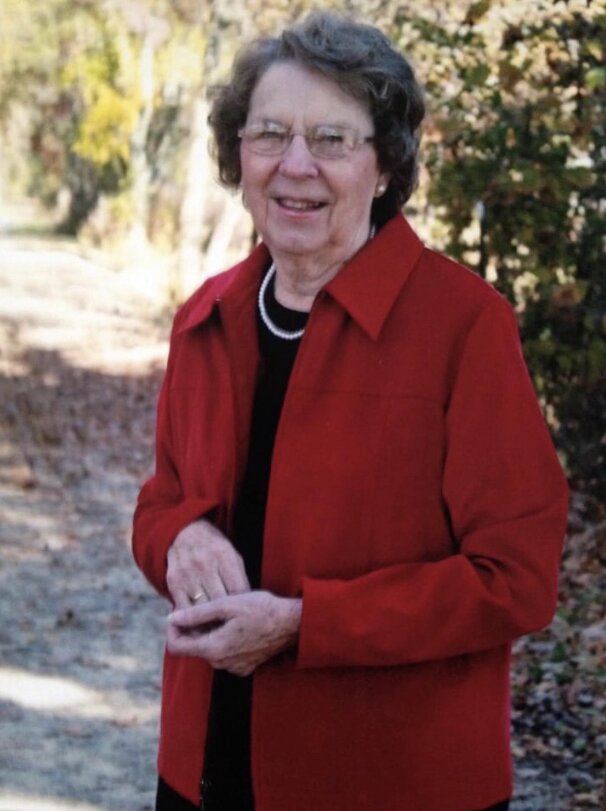 On Thursday, August 18, 2022, Christina Ruth (Abbas) Christen, age 88, was reunited with her husband and love of her life, Bob, in their Heavenly home.

Chris was the third of ten children born to Ted and Lena (Hundt) Abbas on November 11, 1933 in Buffalo Center, Iowa. She grew up in a rural farming community and helped out the family by working in the fields and cleaning fish her father caught.

Chris loved playing sports as the girls in Iowa were playing volleyball and basketball long before Title IX came along. Even as a grandmother, she had no trouble humbling her high school aged grandchildren at the ping pong table. She told many stories of listening to the Girls State Basketball Championship games on the radio and wishing she were there. Her first career thoughts were those of being a sports reporter.

Chris had a very special teacher in high school that knew she was destined to be a teacher and encouraged her to go to college. This teacher gave her an extra push by giving her tuition money.

After high school Chris attended Waldorf College in Forest City, Iowa and received her teaching certificate. While working her way through college at a drugstore, she met a local man by the name of Robert “Bob” Christen. Within 9 months of meeting, they were married in Burt, Iowa on June 7, 1953. Chris said she never expected to have a candlelight service, but that’s what happened when a strong storm blew through and the electricity went out.

Chris then started her teaching career at a small country school where she needed to arrive early to start a fire in the wood stove. During this time, Bob went back to school to obtain his degree. When he graduated they moved, along with their oldest daughter Pat, to Illinois where plenty of teaching jobs available for both of them. Their family quickly grew to include 3 more daughters, Kathy, Kay and Teri.

They stayed in Illinois for 9 years, but Bob and Chris wanted to be back in a small town and moved to Cambridge, Wisconsin in 1967 where Chris taught remedial reading and then first grade while she worked towards her Bachelor’s Degree. After many years of night school and summer school, she received her degree from UW Whitewater in 1972.

Chris was a seamstress and pursued perfection in all her projects. She made many of her own clothes as she was growing up, including formal gowns and her bridal gown. Those skills were put to good use as she made many, many prom dresses, homecoming dresses, bridesmaid dresses and baptismal outfits. Even when she was in the midst of Parent/ Teacher conferences or it was report card time, she made what her family needed.

Chris was passionate about teaching, especially reading, and enjoyed befriending and mentoring young teachers. She wanted all her students to be excited about learning and said her favorite moment was when a student’s eyes would light up and they would exclaim, “I’ve got it!” Chris taught a total of 37 years and even then was reluctant to retire. Along with teaching, she could be seen at most Cambridge sporting events taking tickets or watching her children, grandchildren and great grandchildren participate in sports and other activities. She and Bob had always loved traveling, usually pulling a camper with the six of us crammed into the station wagon. They continued their travels into retirement as they visited family and spent many winters in Arizona.

Chris was a devoted and adoring grandmother to all her grandchildren as she made sure she had crafts, books, hugs and food for all. She enjoyed watching her own daughters take on the role of grandmother as her great grandchildren came into the world bringing even more joy into her life.

Bob and Chris were both inducted into the Blue Jay Hall of Honor as “Community Members of the Year” on September 28, 2013, for their dedication to the Cambridge community and school district.

She was preceded in death by her husband, Robert Christen in December of 2016 and missed him every single day for the rest of her life. She was also preceded in death by her parents, Ted and Lena Abbas and her siblings and their spouses, Harold and Louise Abbas, Bob and Arlene (Abbas) Pate, John Abbas, Fay Asche, Derald and Ruby Abbas, Delbert Abbas and Judy (Abbas) Arrowood.

A Celebration of Life and a Christian burial is being planned for late September.

Enjoy the feast Jesus has prepared for you. John 14:3 “And if I go and prepare a place for you, I will come again and receive you until myself; that where I am, ye may be also.” Rest easy, Mom. You’ve taught us well and we’ve got it from here.

To send flowers to the family or plant a tree in memory of Christina Christen, please visit Tribute Store

Share Your Memory of
Christina
Upload Your Memory View All Memories
Be the first to upload a memory!
Share A Memory
Send Flowers