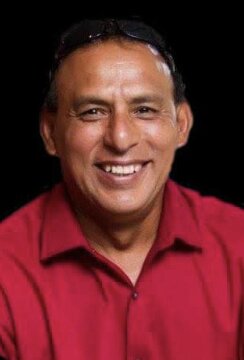 Steven (Steve) Alvarado "Alvy", age 64, of Fort Atkinson, WI passed away unexpectedly on Wednesday, July 20, 2022. Steven was born in Laredo, Texas on May 23, 1958, son of Juan and Juliana (Estevis) Alvarado Sr. He and his family moved to Palmyra, Wisconsin in 1960 and resided in the area the remainder of his life.

After many years of working at Spacesaver, Steve changed careers working construction on many projects in the area. He was currently employed at Cretes Here out of Fort Atkinson, WI. Through his employments he gained many friends over the years who became family.

Steve enjoyed being outdoors golfing and fishing. He was very active and for many years you could find him playing softball down at the ballpark. He was a Wisconsin sports fan who also loved the Dallas Cowboys. He cherished time with family and friends at family gatherings and often was found capturing the moments through video recording and taking pictures. Steve lived in the moment.

Steve will always be remembered as the genuine kind hearted person that he was. He would give the shirt off of his back to anyone without expecting anything in return.

A Mass of Christian Burial will be held on Friday, August 5, 2022, at 5:00 P.M. at St. Joseph Catholic Church, 1660 Endl Blvd Fort Atkinson. Visitation will take place from 3:00 P.M. until the time of the mass. Nitardy Funeral Home is assisting the family. Online Condolences may be made at www.nitardyfuneralhome.com

To send flowers to the family or plant a tree in memory of Steven Alvarado, please visit Tribute Store
Friday
5
August

Share Your Memory of
Steven
Upload Your Memory View All Memories
Be the first to upload a memory!
Share A Memory
Send Flowers