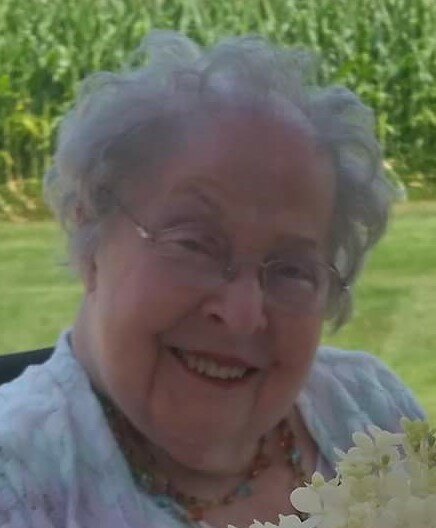 Mildred E. (Strunk) Stanton, age 98, passed away  peacefully in her sleep at Fairhaven on June 5, 2022.  She was born on July 25, 1923, in Whitewater Township to Edward and Evelyn (Viegut) Strunk.  She was baptized on August 12,1923 at St. John’s Evangelical Lutheran Church in Whitewater and confirmed on July 3, 1938 at First English Lutheran Church,  Whitewater.   Mildred graduated from Whitewater High School in 1942.  On April 26, 1945, she married Dean T. Stanton, at First English Lutheran Church in Whitewater, WI. They farmed with Dean’s parents in Elkhorn, WI until 1952, when they purchased a farm in Richmond Township where they farmed until 1964.  Mildred worked for the Milton School District from 1967 to 1979 as a clerk/secretary.

Mildred was very interested in family history, which was documented by her numerous scrapbooks of pictures and clippings.

Services will be held on Monday, June 13, 2022 at 11:00 AM at First English Lutheran Church, Whitewater, Wisconsin, with visitation beginning at 9:30 AM.  Burial will follow at the Hebron Cemetery, Hebron, Wisconsin.

To send flowers to the family or plant a tree in memory of Mildred Stanton, please visit Tribute Store
Monday
13
June

Share Your Memory of
Mildred
Upload Your Memory View All Memories
Be the first to upload a memory!
Share A Memory
Send Flowers