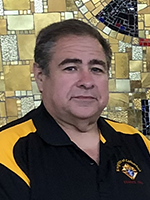 Patrick S. “Chobey” Young, 58, of Fort Atkinson passed away on Saturday, April 16, 2022 after a long battle against pancreatic cancer, at Rainbow Hospice Inpatient Center surrounded by his loving family.

Pat was born on May 23, 1963 at Tripler Army Hospital in Honolulu, Hawaii to Rex and Peggy (Calero) Young.  Pat’s father was a career navy officer, so Pat spent a lot of his early years moving to places including Baltimore, Southern California, and Florida.  After his father’s retirement, the family now of five moved to Fort Atkinson, where Patrick’s father grew up, as well.  After graduating Fort Atkinson High School in 1981, Chobey attended MATC where he received his Associate of Accounting degree.  During his time at MATC, he completed the auto body course from 1981 to 1982.  Pat was proud to be employed at Burn Industrial Supply for over 30 years and never missed a day of work.  He truly enjoyed working with co-workers who turned into family and are now known as “Pat’s Army.”

Patrick was a faithful member at St. Joseph Catholic Church.  He is currently the Grand Knight of the Fort Atkinson Knights of Columbus, and the chapter has graciously decided to honor his entire term which ends in June.  Previously, Pat served as a Boy Scouts of America Den Leader, and as Cub Master for eight years. During his Boy Scout leadership Pat oversaw all three of his grandsons recognized for the Cub Scout achievement, Arrow of Light.  Pat also served on the Fort Fest Committee and Janesville JayCees.  His interests included photography, muscle cars, collecting, time with friends and family, and especially spending time with his grandsons.

The family would like to give a very special thanks to Rainbow Hospice Inpatient Center staff for their exceptional care of Pat and for their compassion towards the family.  Also, a very special thank you to the Burns Industrial Supply staff for treating Pat like family all the way until the end, and for continuing to support him throughout his battle.

Memorials can be made to the family, to enhance Pat’s grandson’s college funds.

May the 4th, be with our family to celebrate the life of Pat “Chobey” Young at an evening visitation from 3PM until 7PM at the Nitardy Funeral Home in Fort Atkinson.  Guests are encouraged to wear Star Wars themed attire to the evening visitation, to showcase Pat’s film favorites.  A rosary service will begin at 7PM at the funeral home.  A mass of Christian burial will be held at 1PM on May 5, 2022 at St. Joseph Catholic Church in Fort Atkinson.  A visitation will take place on May 5, 2022 at the church from 11AM until the time of mass.   Guests may attend mass virtually at https://client.tribucast.com/tcid/7119704108.

Online condolences can be made at nitardyfuneralhome.com

To send flowers to the family or plant a tree in memory of Patrick Young, please visit Tribute Store
Wednesday
4
May

Visitation prior to mass

Share Your Memory of
Patrick
Upload Your Memory View All Memories
Be the first to upload a memory!
Share A Memory
Send Flowers