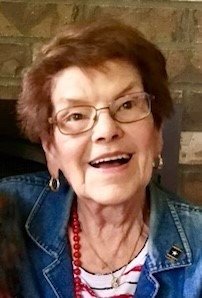 Nancy was born on January 31, 1935, in Whitewater, Wisconsin, the daughter of Meredith (Bob) & Eldora (Zanton) Paynter. She was the first of seven children.

Nancy graduated from Whitewater High School in 1952 and continued her education at Wisconsin State College - Whitewater.

She married James Arthur McCord in 1953. They had two children, Meredith Ann and James Arthur Junior.  While her husband was serving in the Korean War, Nancy and her family lived with her mother and siblings. Upon his return from the war, the family moved to Marine Core Air Station Cherry Point in North Carolina. After completion of his military career, they moved to the McCord Homestead in Wisconsin.

After the passing of her husband James, Nancy later married Robert Ray Morrow on January 6th, 1968. They had one son, Joseph Robert.

Nancy worked as a bookkeeper in various automotive industries for over 60 years. She also briefly worked at Commercial Bank here in Whitewater. For the majority of her bookkeeping career, she worked at Havill-Spoerl Dealership, where she formed many lifelong friendships.

Nancy was very involved in the Whitewater Community. She was intimately involved in her children’s many school and sporting activities. She was a member of the Whitewater Booster club, actively involved in the First English Lutheran Church and an avid sports fan (to say the least), of the Whippits, Warhawks, Badgers, Packers, Bucks and Brewers. With Nancy’s love of life, she made friends everywhere she went. She was known and loved by many.  Her family was everything to her and she was the heart of the family.

Visitation will be from 1:00 pm until 3:00 pm and Memorial Service will follow at First English Lutheran Church in Whitewater on Monday July 19th. Nancy will be laid to rest at Hillside Cemetery in Whitewater on Tuesday, July 20th at 10:00 am.

The Nitardy Funeral Home is assisting the family. Online condolences may be given to the family at www.nitardyfuneralhome.com.

To send flowers to the family or plant a tree in memory of Nancy Morrow, please visit Tribute Store
Monday
19
July