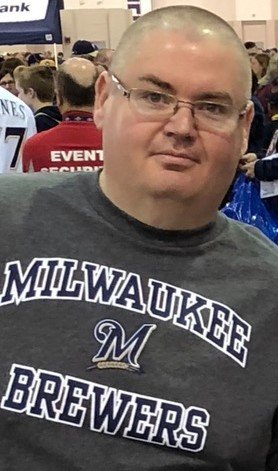 Richard was born March 20th, 1975, in Richland Center, Wisconsin. He was born to Judith and Paul Anderson and graduated from Washington Park High School In Racine, Wisconsin. Richard then went on to attend both UW-Platteville and UW-Whitewater. It was on the Whitewater campus when he became a lifelong brother of the Lambda Chi Alpha Fraternity. Richard had a way with words and became a successful debt collector, with his last job being with Asset Recovery Solutions in Janesville, Wisconsin.

Richard enjoyed cheering on the Brewers, Badgers and Packers, as well as always being excited for the newest Star Wars installment. After losing his leg to a serious infection, he often found it hard to attend the Rock music shows of his favorite bands but still did everything he could to go. Richard had a lifelong mantra of "it’s better to be hated for who you are than to be loved for who you aren’t”, and absolutely lived that way. He would tell you exactly how it is but would also always be the first one to pick you up with a helping hand. His strong presence and passion for everything he did will be severely missed.

Richard is survived by his brother Robb Anderson of Fort Atkinson, Wisconsin and a vast network of friends that are too many to be named but were always considered family.

He was preceded in death by his parents Judith and Paul Anderson, both sets of grandparents and his loyal dog Boomer.

No formal services will be held at this time, however a Celebration of Life will be held on Saturday April 24, 2021 at Richard’s home in Fort Atkinson, Wisconsin starting at 1 p.m. All are welcome to come and share stories and memories of someone who is gone but not forgotten.

To send flowers to the family or plant a tree in memory of Richard Anderson, please visit Tribute Store