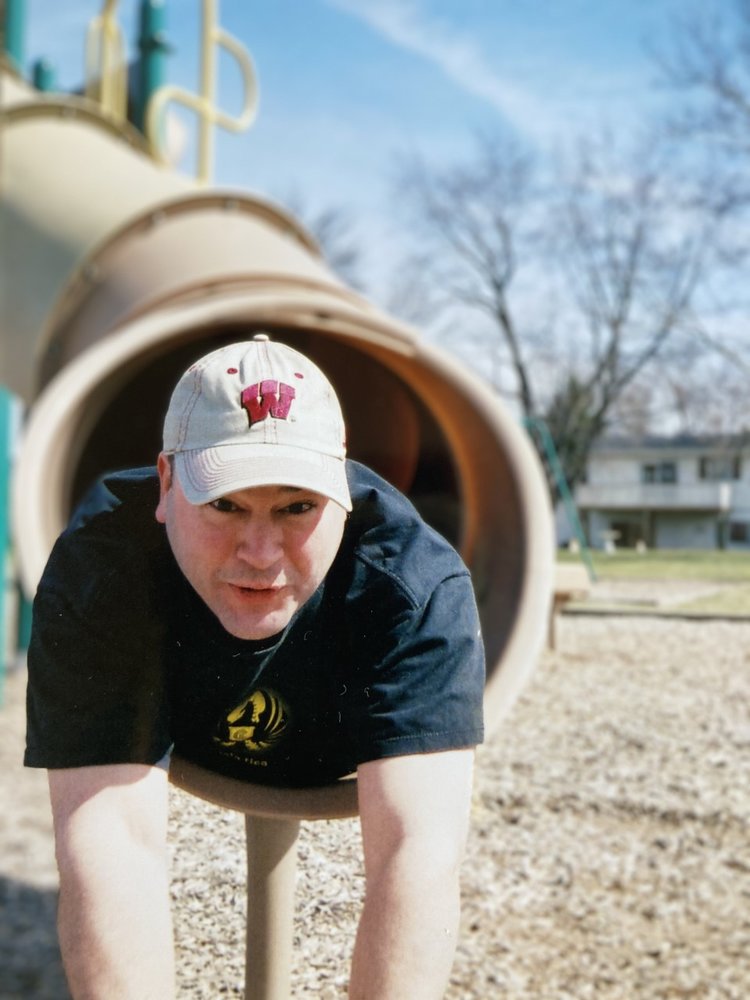 Christopher LaRoque Malas, 51, a longtime resident of Madison, died on Friday, November 6, 2020 at St. Mary’s Hospital. Chris was winsome and well-loved for his quick wit, positivity and openness. He had an infectious smile and bouncy laughter. His liveliness and warmth radiated effusively to people around him. He would doggedly defend what he believed to be fair, inclusive, and honest. Chris valued authenticity and lived life on his own terms.

Chris was born on July 9, 1969 in Madison, WI to John and Eleanor (Brookings) Malas. He was the second of five siblings. In their youth - and perhaps to the chagrin of their Cambridge Elementary teachers - the five were impressed to note in themselves a remarkable likeness to the Herdman siblings of The Greatest Christmas Pageant Ever. Chris grew up fishing at the Rockdale dam, exploring the stream behind the house, and stacking cords of wood with his big brother John. Chris would fondly reminisce about growing up in Rockdale, recalling the forts built and wars waged at the Fosdal’s, pinochle played at the Homberg’s, and the relishing of homemade chocolates at the Watson’s holiday parties.

In high school, Chris attended La Follette High School in Madison where he met Julie, her brother Dan, and Lisa, who all became lifelong friends. But he rejoined old friends, Aren, Heidi, Heather, and Dave (and his favorite teacher, Bob Lacke) to graduate from Cambridge High School in 1987. After high school, Chris devoted himself to his work at the Madison Concourse Hotel as the Director of Purchasing. In the 30 years he dedicated to the Concourse Hotel, Chris made many close friends. These included Chef Brian, who trained him in the finer points of food and wine; and musicians Tyler and Reid, who inspired Chris to no end. Along with friends and family, Chris embraced life through traveling the world, live music, and discussing politics. He also enjoyed playing pick-up games, league sports, and was an avid fan of the Mallards, Brewers, Badgers, and Packers.

Chris took tremendous care and delight in his fifteen nieces and nephews and one great-nephew. Carrying on his highly competitive Capture-the-Flag spirit are: Karissa, Nicholas, Jonathan, Preston, Justin, Brittany, Isabella, Spencer, Prescott, Meyer, Maëlle, Roxie, Kellan, Finley, Abrene, and little Rowan. He is also survived by his mother Eleanor (Ken) Schemenauer, Rockdale; step-mother Marylou Rigdon, Fort Wayne, IN; beloved son Zachary Hatch, Los Angeles, CA; siblings John (Jennifer) Malas, Pentwater, MI; Colleen D’Ascoli, San Diego, CA; Heather (Zachary) Davis, Emden, IL; Corrie (Andrew) Shapiro, Santa Fe, NM; and step-siblings Matthew Thompson, Amy Thompson, Karin Vassar, and Anne Rooney. He was cherished by extended family and is survived by his Uncle Jack (Cathy) Brookings, Aunt Mary (David) Wolfe, Uncle Bill Malas and many cousins. Chris’s friends were also like family to him. As he would say, you know who you are! Among those friends so loved by Chris, the family would especially like to recognize Denise Hoffman and Aren Larson who were there for him in the hospital. Chris was preceded in death by his father, John Malas, his cousin David (Davey) Wolfe, cousin Robert Malas, brother-in-law Joey D’Ascoli, and cousin Joanne Breedon.

Services will be held on Saturday, November 14 at Willerup Methodist Church 414 W. Water St. Cambridge, WI 53523. This livestream of this service can be found at https://youtu.be/SmqSmluXee4. Visitation begins at 10:00. The funeral service will start at 11:00, followed by a graveside burial service.

To show your appreciation for the man who loved life, Chris Malas, please join the inclusive, all-abilities Friday Night Dance Party at Mother Road Studios motherroadstudios.com or donate in his name! Locally, you can also help fight homelessness through Porchlight in Madison porchlightinc.org. Lastly, the family would like to send special thanks to the St. Mary’s Hospital ICU staff and organ donation team who enabled Chris to express his gracious spirit to others in need.

To send flowers to the family or plant a tree in memory of Chris Malas, please visit Tribute Store
Saturday
14
November

Share Your Memory of
Chris
Upload Your Memory View All Memories
Be the first to upload a memory!
Share A Memory
Send Flowers