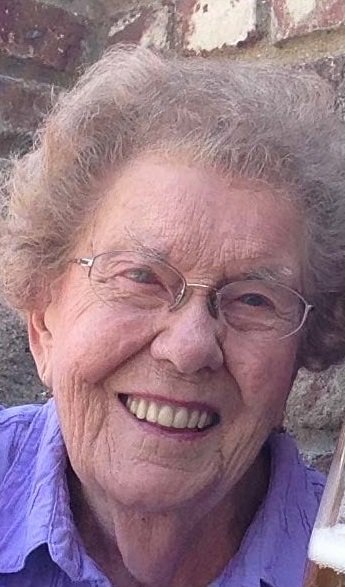 Bea was born March 11, 1924, in Edgerton, Wis., the daughter of Charles and Ida (nee Anderson) Berge.  She grew up on a farm near Cambridge, Wis.

She attended grade school at Smithback School in the Town of Christiana, Dane County, before graduating from Cambridge High School in 1942.  Following her ambition to be a nurse, during World War II she enrolled in the Swedish-American Hospital School of Nursing in Rockford, Ill., graduating in 1943. Following graduation, she worked as a registered nurse at the Edgerton, Wis., hospital.  While working at the hospital, she met Stanley Allen and they were married October 19, 1946, at the Deerfield (Wis.) Lutheran Church. She was proceeded in death by Stanley, who died in 1994.

She is survived by one brother, Roger Berge (Stoughton, Wis.). She was preceded in death by two brothers, Stanley and Donald.

She worked for many years as a registered nurse at Countryside Nursing Home in Jefferson, Wis., before retiring in 1989. During her retirement years, she enjoyed traveling, bowling, and coffee and visits with friends. In retirement she developed a passion for quilting, generously sharing her talents with friends and family.

She lived most of her life in the Cambridge, Wis., area. In her last few years she moved to Cedar Community, an assisted-living community in West Bend, Wis., to be closer to her family. She greatly enjoyed the enrichment activities at Cedar Community and the care and friendship of residents and staff. Her family would like to express their thanks to the staff at Cedar Community East, The Cottages, The Kathy Hospice and Lifestar Ambulance service for all of their help.

She was an active member of Deerfield Lutheran Church and will be laid to rest in the church’s cemetery.

Due to COVID-19, the services will be private to the family.  A celebration of life will take place next summer when times are safer to gather.

In lieu of flowers, a donation can be made to the Deerfield Lutheran Church, 206 S Main St, Deerfield, WI 53531.

To send flowers to the family or plant a tree in memory of Bea Allen, please visit Tribute Store

Share Your Memory of
Bea
Upload Your Memory View All Memories
Be the first to upload a memory!
Share A Memory
Send Flowers