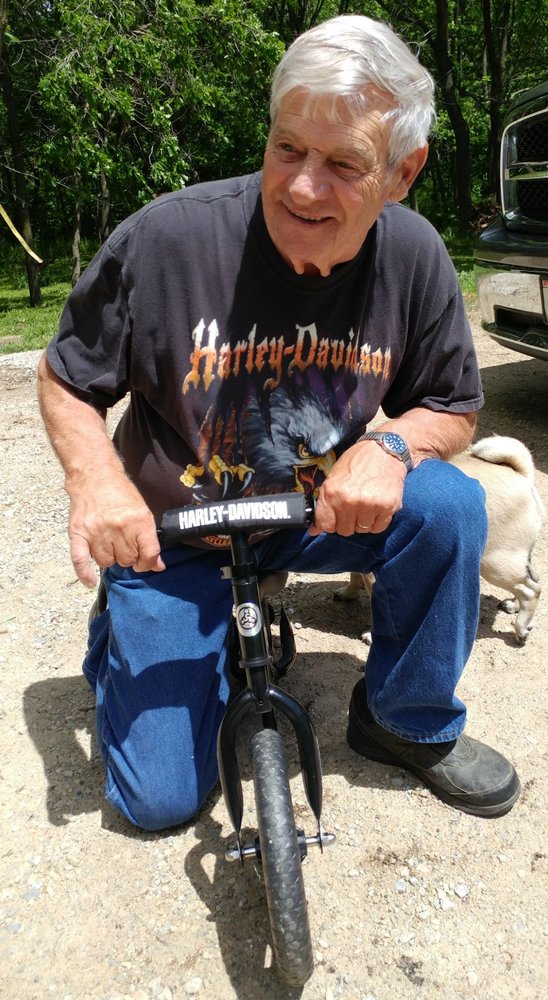 Ken(Kenny) Westphall, 80, of Hebron passed away on January 24, 2020 surrounded by his family who loved him endlessly.

Ken was born on April 30, 1939 to Russel Perry and Margurite Emily(Schroeder) Westphall in Fort Atkinson.

Ken enjoyed having a good time with his family who loved him dearly and will miss his sense of humor and playfulness.  He took pleasure in cruising on his

Harley-Davidson, relaxing at Lake Camelot, deer hunting, and farming. And more than anything else, spending time with his beloved wife and soul mate, Lu (Freeman)Westphall who he married on March 28, 1970.

Ken attended Tamarack View Elementary School. As a young man he worked on several farms and then was proud to have worked at Jones Dairy Farm, farming with his father in-law, and a few other jobs before working at DJR Manufacturing for 22 years as a machinist and delivery driver. After retirement he contentedly spent hours driving tractors in the fields to help on his daughter and son-in-law’s farm.

He was predeceased in death by his parents, a brother Russel Jr, and a sister Karen.

There will be no visitation or services as per Ken’s wishes.  A private family interment will take place at a later date.

To send flowers to the family or plant a tree in memory of Kenny Westphall, please visit Tribute Store

Share Your Memory of
Kenny
Upload Your Memory View All Memories
Be the first to upload a memory!
Share A Memory
Send Flowers