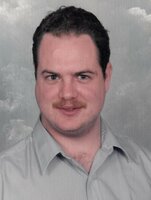 Wayne Steven Urben, 52, Lake Mills, formerly of Fort Atkinson, passed away at his home on Sunday, January 2, 2022.
Wayne was born in Madison, WI on December 17, 1969 to Conrad and Susan (Ramminger) Urben.  He graduated from Fort Atkinson High School and from Spartan School of Aeronautics in Tulsa, OK.  He was very proud of being involved with the Civil Air Patrol and obtaining the rank of captain. Wayne was an avid reader and researcher.  He enjoyed spending time with his family at gatherings.
He is survived by his mother, Susan of Fort Atkinson; brother, Perry Urben of Denmark, WI; Aunts: Isabelle and Patricia; uncles: Robert, Richard and Roger.  He was preceded in death by his father and 9 aunts and uncles.
A Memorial Service will be held on Friday, April 22, 2022 at 11:00am at Trinity Lutheran Church, 314 Barrie St. Fort Atkinson, WI.  Friends may call at the church on Friday from 10:00am until the time of the service.  Memorials may be made in Wayne’s name to the Watertown Civil Air Patrol or to the Jefferson County Humane Society. Online condolences may be made at www.nitardyfuneralhome.com .  Nitardy Funeral Home, Fort Atkinson is assisting the family.