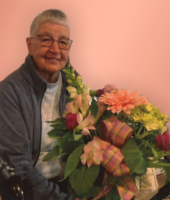 Gloria was born on February 11, 1931 in Chicago to Harry and Rose (Schrepfer) Jarm.  On June 23, 1950, Gloria married George Nathan and together they had ten children.  After their marriage, the family stayed in the Chicago area for thirty years, before moving to Fort Atkinson, WI.  Gloria eventually moved to Sauk City, to be closer to her daughter.  She worked as a homemaker, bookkeeper at Master Floor Service and later as a daycare provider at the Kids House Too.

A donation can be made in Gloria’s honor to ATCP.org/donate.