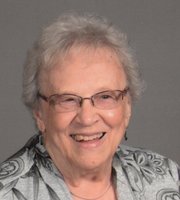 She was born to Herman and Adela (Doll) Radloff on January 4, 1932.  On July 2, 1968, Inez married the love of her life, Eugene Lyle Hoeye in Westminister, Colorado.

Inez spent many years as a credit manager for Sears and Robuck until they closed and then she worked for Highsmith Co. until retirement.

She spent time as a volunteer for Meals on Wheels and the Food Pantry.  She also enjoyed traveling for much of her life.

She was preceded in death by her parents and children; son Ron Schultz, and daughters Louise Kuban and Linda Herrmann.

Services for Inez will take place at 11AM on Friday, April 23, 2021 at Trinity Lutheran Church in Fort Atkinson.  A visitation will take place from 9AM until the time of services.  A burial will follow at Hebron Cemetery.

In lieu of flowers, memorials can be made to Trinity Lutheran Church, 314 Barrie Street, Fort Atkinson, WI 53538.