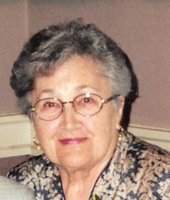 Elizabeth Guld, 96, Fort Atkinson fell asleep in the arms of her Lord on Thursday, January 30, 2020 at the Rainbow Hospice Inpatient Center in Johnson Creek, WI.

Elizabeth was born on October 8, 1923 in Apatin, Yugoslavia to Johann and Elisabetha (Utry) Schmidt.  She left Yugoslavia as a refugee in 1945 and settled in Bavaria, Germany where she married John Guld.  They had two sons in Germany; John and Gunther. They immigrated to the United States in 1952 and settled in Fort Atkinson.  She became a citizen of the United States in 1958.  Elizabeth worked as a seamstress for Better Sox Knitting and Stortz’s Hosiery.  Her hobbies included needle art and embroidery.  She was an excellent cook and baker.  Elizabeth was a member of St. Joseph Catholic Church.  She was beloved by both family and friends who called her Oma.

As an expression of sympathy you may wish to consider memorials to Rainbow Hospice or to St. Joseph Catholic Church.  The family would like to thank the staff’s at Fort Health Care, Sunset Ridge Memory Care and Rainbow Hospice for their loving care.