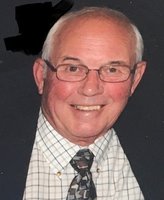 Ed graduated from Fort Atkinson High School in 1951, served in the United States Air Force and dedicated over 30 years working for Western Electric. Upon retirement, Ed moved to his home at Lake Redstone in LaValle, Wisconsin.

Ed always had a love of sports and the outdoors. He earned 10 high school athletic sport letter awards, loved supporting his children’s and grandchildren’s athletic endeavors, cheering on the Wisconsin Badgers, Green Bay Packers and Milwaukee Brewers and discussing the outcomes of games with his son, Rick. He had many fun times hunting, fishing, and playing golf with friends and family.

Ed met his best friend and sweetheart, Judy Williams, at a New Year’s Eve dance in 1990. Together they shared wonderful years traveling and spending winters in Marco Island, Florida. Ed loved his home and friendships made at Lake Redstone.

Ed’s family would like to thank the wonderful staff at Sauk County Nursing Home for the loving care and support he received.

Memorials may be directed to the Michael J. Fox Parkinson’s Foundation or the Lake Redstone Property Owners’ Association.