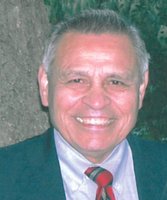 Paul was born on January 15, 1934 in East Los Angeles, California to Aurelio Sr. and Guadalupe (Romo) Yvarra. Paul completed his undergraduate and master’s degree at UCLA and then received his PhD at Clairmont University in California.  On September 5, 1964 Paul married Teresa Sanchez.  .  He served in the United States Army in the Vietnam conflict as a Captain.

In 1974 Paul moved to Whitewater to teach at the University of Wisconsin, Whitewater and was a wonderful mentor to his students. . During his time at the university he served as coordinator of various programs, chaired on many committees and served as a consultant to many of the area school districts. Paul’s work involved the study Dr. Edward Deming’s Theory.  Based on this theory he worked with big corporations to install quality management systems.  Paul loved to travel, enjoyed baseball and was an avid UCLA Bruins fan.  He was a member of the Whitewater school board and was a Walworth County Supervisor.