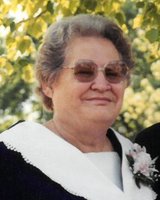 Beatrice Louise (Koch) Plucinski-Schlorb, 86 passed peacefully in her sleep on Sunday July 14, 2019 at the Edgewater Haven Nursing Home in Port Edwards, Wisconsin where she had been a resident for the last 4 years.

Bea was born to Arthur Jacob and Myrtle M. (Gerloff) Koch on October 19, 1932 in Whitewater, Wisconsin.  She grew up with her siblings Herman, Caroll, Hazel and Raymond.

Bea graduated from Whitewater High School on May 28, 1952

She married the Love of her Life Harry David Plucinski JR on November 28, 1953, they were married at St. John’s Ev. Lutheran Church  in Whitewater, Wisconsin.

Bea was known for her quilting, sewing and crafts.

Together they did a lot of traveling.

Funeral Services will be at 12PM on Friday July 19, 2019 at the Nitardy Funeral Home Chapel, 550 N. Newcomb Street, Whitewater, WI.

Visitation will be held from 10am to 12 noon on Friday at the funeral home until the time of the services.  Bea will be laid to rest next to JR at Hillside Cemetery Whitewater, WI .